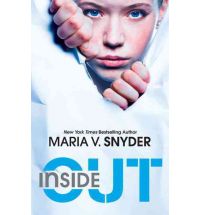 Trella is a scrub. A nobody. One of thousands whose place it is to work the lower levels making sure everything is clean and working properly for the Uppers. Trella is a loner even by Scrub standards, she has one friend, does her job and tries to go unnoticed by the Pop Cops. being on of thousands makes it hard to ever be alone so Trella has taken to sneaking around in the pipes, even sleeping in them. It has earned her the title of ‘Queen of the Pipes’ and that is where the trouble starts.

She sets out to prove once and for all that the Gateway doesn’t exist. She does it to help a friend and figures it doesn’t matter because it’s just her life she is risking. But then she finds the disks and saves the Broken Man. These actions start events spinning out of control. Somehow, inadvertently she stars a rebellion, meets an Upper, might be falling in love, uncovers lies and ends up leading a rebellion. Not bad for someone who really only wanted to be left alone.

Snyder has created a dystopian world with two distinct classes, both under the control of one family. This is a story of power corrupting. The world is developed well and slowly it isn’t until the end that you really begin to understand the world you have been traversing through. She has woven a tight tale with a determined and flawed heroine, who despite her trying to keep people at arms length, you can’t help but like. The characters she places around Trella are wonderfully diverse and the world layered. There is plenty of intrigue to keep you guessing, a ton of loyalty and totally heartbreaking betrayal. I like this as a standalone and am not sure how it will translate to a series but I will certainly pick up the next one to find out.

Thea Stilton and the Mountain of Fire