This book was sent to me by Hachette Australia 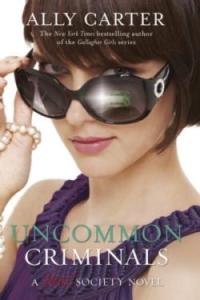 Kat Bishop is back. She stepped away from the family business before being thrust back in and becoming the girl who orchestrated the robbery of the greatest museum in the world. She is still not interested in rejoining the family business but on the side she is working to restore stolen treasures to their rightful owners. Then along comes an untouchable heist. Kat is asked to steal the Cleopatra Emerald, a stone that Uncle Eddy (head of the family) has deemed off limits. The other thing  about the Cleopatra is that it is cursed.

Kat and her crew step up to the challenge but what happens when Kat is the one being played? Will she be able to replicate the success of the Henley? Kat and her crew are pushed to their limits when they come up against their toughest opponent yet, a con who already knows every trick in the book.

Kat Bishop is such a fun character. I mean who doesn’t dream of a little larceny accompanied by some time living the high life? Or is that just me? Kat may not technically be the good girl, she is a thief after all, but she has a strong moral code. It is easy to forget the players in this heist are so young. Carter has written them so well, they have smooth and rough edges, strengths and weaknesses. She doesn’t allow the characters to run away from their flaws rather she has them embrace them. Kat’s youth and doubt provide a delicate counterpoint to her skill. Her uncertainty in her relationship with Hale allow the story and the characters to develop outside the job. Her crew boost Kat when she’s down and give her sound advice keeping her from getting too high.

The story moves at a brisk pace as they jetset around the world plotting, discarding, sorting, scheming and setting in motion the plan that will get them the Cleopatra Emerald. With a skilled hand Carter presents us with a world most of us are familiar with, even if it isn’t on a first hand basis (the high rolling con), then she peoples it with players much younger than we expect to see. However she does it, it works. The characters ages are an advantage and their background insure the whole concept doesn’t seem totally implausible.The way she has them moving through their paces keeps you relaxed by the seeming reality and enthralled by the quick changes, sleight of hand and clever manipulations. Uncommon Criminals is a ripping story that leaves you wondering, with the world at their feet where will the talented Kat and the crew she tries unsuccessfully to isolate herself from, end up next? This is a thoroughly fun and addictingly escapist romp.

Purchase: here (hardcover) or use Booktopia logo on side of page