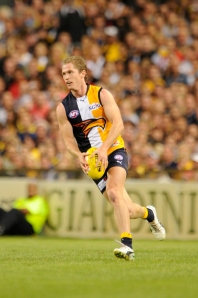 Selwood made his AFL debut in 2003. Between then and now Selwood has been a AFL rising Star nominee, a player in the International Rules Series vs Ireland and an eagles premiership player. In 2007 and 2008 he was voted third best and fairest player. Mid-season shoulder injuries hampered his 2010 season and he missed six games, but 2011 has seen him start strong.

What is the first book you remember reading?

Is there a book you think everyone should read and why?

Lance Armstrong books. Dealing with adversity and being able to achieve great things.

Has there been a character you really liked and why?

I enjoyed Robert Langdon in the Davinci Code – by Dan Brown. Seemed very intelligent and full of suspense and adventure.

Where is your favourite place to read?

Usually read in bed to relax after a long stressful day