Only the Good Spy Young 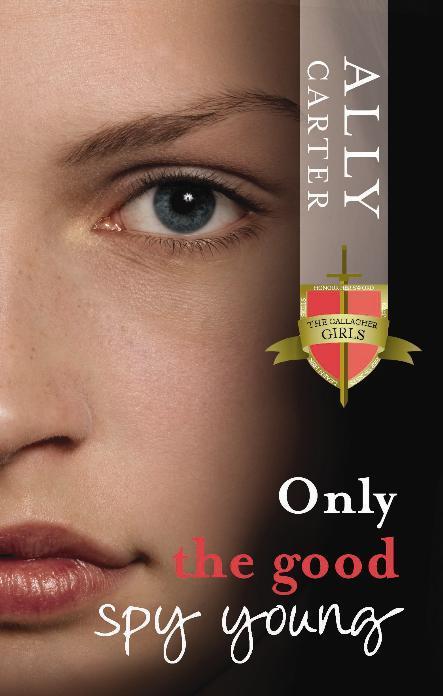 Bk 4 of the Gallagher Girls series

Cammie was born to be a Gallagher Girl, and that has always come with the knowledge that it is a life full of risk and danger. There has always been a buzz associated with that, with knowing that she was Cammie the Chameleon. Now though things have changed a terrorist organisation is set on kidnapping her and someone she has always looked up to, trusted and respected has been come to be labelled as a double agent, a traitor. For Cammie it feels as though her world is falling apart. All of this impacts on her school life as well, so many things have changed. Who can Cammie now trust? Her best friends of course. Together they must work through the new problems and still deal with all the stuff spy school throws at them.

This addition to the series throws a darker twist on things as Cammie’s safety nets are pulled from her and she has to discern truth in amongst a whole lot of lies, lies delivered by trained liars. The complexity of the story and the layers drag the reader in an keep you engaged. The world is one as we know it and that makes it identifiable and let’s face it there is a part of many of us who’d love to believe a spy school such as this existed. The characters are varied and complement each other well, within themselves they have strengths and weaknesses that Carter draws out of them. These books are fast paced and sheer entertainment. A great read and to be honest in my humble opinion would be decent source material for a movie or three.

I received my copy from the publisher.

Frankie Fox Girl Spy: Book 1
Frankie Fox knows her Dad does secret work, she understands but misses him. Instead she is trying to teach herself to develop spy skills, she really wants to be a spy. Then the worst happens and her father is kidnapped by an evil group called the Alliance. This is when Frankie learns that she has been secretly trained to be a spy (all the prompts her father gave her were for a reason). It is up to her and her friend JJ to rescue him.
This is a fun adventure centred around a feisty heroine. Frankie is smart, observant and willing to learn. The story moves at a brisk pace and spy stories often do well with kids. They encourage them to push at boundaries and learn outside the normal skills (even just encourage them to work at their normal classes). Also they are simply fun reads. It is suitable for ages 7+ so is at the top end of 4-9 category and low end of middle grade fiction.
Publisher: Hachette Australia
Published: 27th January 2015
Key Words: Spy Stories, Adventure
Format: Paperback
Number Of Pages: 128
ISBN: 9780734415684 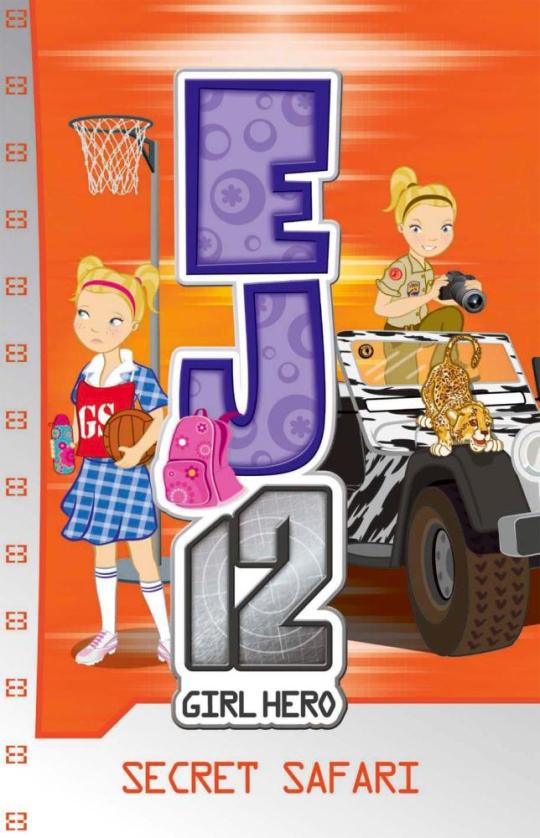 Emma Jacks and her friends are trying out for the A netball team but there is a new girl in school who seems determined to make things harder for Emma. After what she thinks is a disastrous tryout EJ has to wait until after the holidays to find out about the team. Then she discovers her mother has won a family trip to Africa. This turns out to be a cover story for another SHINE assignment. Someone has been hunting wild animals for their horns and skins and EJ has been asked to look into it.

When it appears an evil SHADOW agent is always one step ahead of her, EJ has to find a way to outwit her opponent. It is the only way she can keep the animals safe.

Emma Jacks is a smart girl, she needs to be to juggle the life of a secret agent with that of a normal girl. In some ways the agent part of her life is easier to deal with than the school side and that is a touch I like. It somehow makes her that much more relatable. The other nice thing about these books is that she doesn’t have to face everything alone. The adventures and topics are interesting. These books are great for girls wanting to catch a little of that spy action for themselves.

Don’t Judge A Girl By Her Cover

Cammie Morgan’s holiday has just gotten fun, or so she thinks when she gets to join her friend Macey McHenry on her dad’s campaign trail. Fun takes on another meaning when she has to draw on all her skills to prevent her friend from being kidnapped off the roof of a building. Of course Cammie and Macey attend Gallagher Academy where they have learnt rather more interesting skills than those taught in an average high school.

This is just the start of the toughest period of Cammie’s young life because even though Secret Services have become more involved in Macey’s personal security, even when back at school, Cammie, Bex and Liz really can’t leave their friend out there essentially alone. The girls are determined to help keep her safe even if it means going against Cammie’s mother’s instructions. The more they uncover though the more surprising the truth appears to be.

This is a great addition to the series. This has a greater focus on friendship and it is wonderful to read the different character arcs particularly in this case, Macey’s. It is cool to delve into the different spy skills and how they can be utilised. These girls consider themselves family and this is how they treat the situation. When they try to do the right thing and get ignored they don’t give up, they do what they are trained to do. Smart, sassy, determined and more than a little stubborn these girls are not only entertaining they give examples of how girls are just as capable of achieving anything. They are also not invincible or infallible. Cammie’s weakness is her uncertainty of dealing with Zach, and this can unsteady her at the most inopportune tines, but when it comes down to it she will do what ever she has to to keep her friend safe.

Cross My Heart Hope to Spy 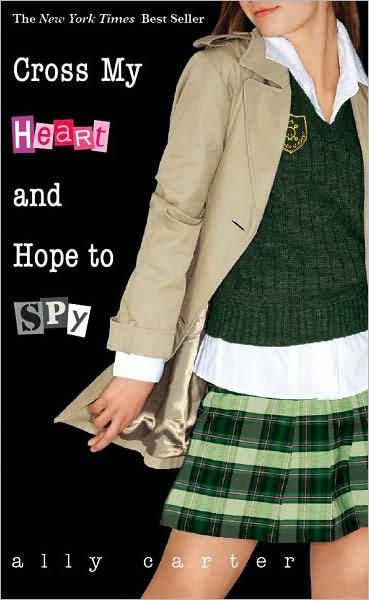 The Josh disaster of last semester has left Cammie just wanting to have a quiet semester, after all using her spy skills to get her first boyfriend then being forced to give him up was quite enough. She even promises her mother to stay out of trouble. That is way easier said than done when your name is Cammie Morgan and you are the child of spies, attending the premier spy school. Cammie and her friends discover that there is something going on codenamed Blackthorn and they are determined to uncover it. Things aren’t that simple in the spy world and Cammie gets blamed for the biggest breach of school security any of them have ever seen. It’s up to Cammie and her friends to clear her name but that means breaking her word to her mother. Can her life get any more complicated, sure if you throw in another boy who notices the girl who is best at going unnoticed.

Cammie is still very much out of her depth when it comes to the opposite sex and she isn’t really over Josh so she throws herself into school work. Josh doesn’t really remember all of what happened between him and Cammie and that makes things very awkward. Fortunately for Cammie, she has friends and a very useful resource in Macey McHenry, who acts as the boy-translator for the girls. The friends work well together, combining their different strengths in each little task in front of them, whether it is breaking and entering or setting up a hidden command post.

The addition of Zach is great because not only can he match Cammie in specialised skills, like Cammie you just don’t know where you really stand with him. The relationship thing gives these characters a reality that if it wasn’t there would leave these characters a bit two dimensional. As it is it is awkward and amusing but the the really fun stuff to read is the spy stuff. The competition aspect of this book gives it an extra level of tension and tension is what helps make a story interesting. A good follow-up to book one.

Cammie Morgan attends the exclusive Gallagher Academy for Exceptional Young Women, a school that is not exactly what it appears to be. To the outside it looks like a snobby school for rich brats but behind the walls are classes on chemical warfare, covert operations, code cracking and advanced martial arts. Gallagher Academy is a school for spies. Cammie was destined for Gallagher, both her parents were spies and her mother is now the Academy’s headmistress. Cammie is fluent in 14 languages, can kill a man and is an expert at hiding in plain sight, what Cammie simply is not equipped for is the simple scenario of boy meets girl. This whole situation is made worse by the fact that Jpsh will never know who she really is, and how can a relationship survive that?

A boy meets girl tale with a twist. Cammie isn’t the prettiest or the smartest girl, she has made an art of being the one who goes unnoticed, until Josh does just that. Josh breaks through walls Cammie never realised she had. He is charming, and unskilled at subterfuge. Cammie is totally out of her depth when it comes to this relationship and the fact she has so few boy/girl skills gives this story a fresh twist. It was a fresh, fun read and a great start to this series. Gallagher Academy is the sort of place I would have loved to go, if it was an option, Carter has given it the reality of high school (though not quite the division of groups you see in a normal school) and the layers of a spy school, including cool gadgets. Mostly though it is a look at people skills and the pitfalls of growing up.

Mission One : The Catier Emerald

I received this book from the publisher

Kitten Kaboodle is no ordinary kitten, in one part of his life he is Judy’s kitten Buttons, but in his other part he is a top agent for CAT. His mission this time is to infiltrate the DOG fortress disguised as a pedigree kitten and discover what it is that DOG are up to this time. Kaboodle has to be careful that he doesn’t draw too much attention to himself and blow his cover. Then if at all possible the plan has to be sabotaged.

This is a fun little adventure/spy book where the central character happens to be a kitten. The chapters aren’t very long, the text is large and simple to understand, and the black and white illustrations are fun. Kaboodle is charming, if a bit self important, he is brave and determined. For someone who loves adventure and animals this looks like it could be a good series for them. It’s pace is good and descriptions clear. Worth a look.