I was sent this by the publisher. 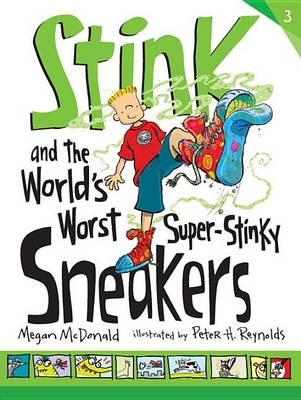 Stink is super excited to be going on the school excursion because they are going to the Everybody Stinks exhibit at the Science Museum. Whilst there Stink discovers he has an amazing gift, he has a really good nose, he can tell the difference between all sorts of super smelly things.

Stink decides to enter his stinky sneakers in the competition for the worst smelling sneakers but his sister Judy ruins his plans. This is when Stink sets out to make his shoes as stinky as they used to be. Then he discovers that his gift gives him an amazing new opportunity.

Stink is a lot of fun, a good match for his sister Judy Moody. The stories are fun filled and even have snippets of interesting information. The language is perfect for young readers and the illustrations complement the stories wonderfully. A great little series.

Purchase: here or use Booktopia link on the side of the page.

Stink and the Incredible Super-Galactic Jawbreaker

I was sent my copy by the publisher 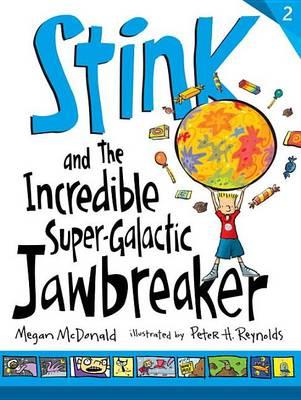 Stink uses his money to get himself a jawbreaker, but he soon finds himself disappointed as it doesn’t break his jaw. Stink decides his best course of action is to write a letter of complaint to the company that makes the jawbreakers. This turns out better than he hoped because he gets a huge box of jawbreakers sent to him. Due to his success Stink decides to write a whole lot more letters in the hope he will get more stuff sent to him.

Grandma send Stink some glow in the dark pyjamas to wear to the school sleepover, even when things goes wrong it’s not so bad because Judy does something cool to fix it. Then it seems his best friend Webster isn’t talking to him and Stink doesn’t know what he has done wrong. Turns out that Stink in his excitement at getting big things in the mail overlooked a very important small letter.

A fun instalment from the world of Stink. These stories show what you can do and what some important things are that may be easy to miss. Stink is a bright character, who is proactive in things he does. The stories are a lot of fun and perfect for early readers who want the challenge of a chapter book that isn’t too tricky for them.

I was sent this by the publisher.

Stink gets measured every morning, Stink is desperate to grow but the result is always the same. Until the one day it is different, the only problem is the difference is in the wrong direction, is it possible that Stink is shrinking?

Stink gets to take the class newt home one weekend. It’s a privilege and Stink is excited, all he has to do is look after him and keep a record of everything he does. That won’t be do hard because after all newts don’t do an awful lot. But then it all goes kind of wrong.

Presidents’ Day is coming up and everyone in Stink’s class has to pick their favourite president. Stink picks James Madison and decides that Madison should be featured on the state quarter.

This is almost like three stories in one. The themes from each story run into each other which gives the whole things good flow. Stink is enthusiastic and that is catching, he can be a bit silly and a lot of fun. The language is perfect for those beginning to gain confidence in their chapter book reading. There are fun illustrations as well, which help break up the text making it seem less daunting. The Stink books are thoroughly enjoyable.

Book 9 in the Judy Moody series

Judy Moody is in a Nancy Drew kind of mood. She’s been reading stories about the girl detective and has decided that that is what she wants to be. It is a good thing that she is in a mystery solving mood because she finds herself smack in the middle of an honest to goodness mystery. Mr Chips, a police dog in training, has gone missing. Never fear, Judy Drewdy is on the case, she thinks he was taken by evil dognappers and is determined to track them down. Armed with her detective kit and her associates; agents Stink, Pearl and Rock.

Judy is a girl who is enthusiastic and quickly gets swept up into her own bright ideas. She may not always be right in her assumptions but she is determined. McDonald has created fun characters with entertaining stories. The print is fairly large but the chapters average about 14 pages which makes the books best suited to readers in the 7-9 age category. Judy Moody is a lot of fun.

Judy Moody has plenty of moods and she starts her new school year off in a bad one. ROAR! Then her teacher gives the class a ‘Me’ collage project and Judy starts to have some fun. She knows what she wants to be but there are so many other places to fill on the collage and she doesn’t know what she is going to do to fill them. While thinking on that she has to have fun with her best friend Rocky, not go to Frank’s birthday and hope her brother Stink doesn’t ruin everything.

A fun read about the important things of being in grade three. And she learns a few things as well, including how your attitude can change a bad mood into a good one. There is more text  and less pictures than some of the early reader books so probably suited to a reader more comfortable with reading than a total beginner.