Under the Earth’s crust live the monsters. In a place called Skull River City something terrible has happened – the city’s entire supply of blood has been stolen from the blood bank. This could mean the end of everything unless it can be tracked down and returned. For Rocky and Vince it’s a little more immediate as their friend has an illness where she needs to have blood every couple of hours, without it she will die. The clock is ticking and  Rocky and Vince decided to investigate. This takes them into the most dangerous place they know – Mosquito Mountain and they will go up against the fearsome Mosquito King. There is more at stake than either of them realise.

This is a fun graphic novel especially for those who like the gorier things of life, like brain burgers and blood shakes. Rocky is a werewolf whose dad is head of security at the blood bank, Vince is a vampire whose scientist dad is missing. The story is tight, the illustrations fun, all in black and white and I can’t decide if the story would be better if it was in colour. There is just enough gore for those who like that stuff and the story is fun and entertaining with a few surprises along the way. At it’s heart is adventure and friendship.

Nancy and her friends are on a high tech train, transporting a very special tank across country. They thought getting the tank would be the hard bit, that is until someone hacks into the trains computer brain and hijacks it. Speeding out of control, with key people unconscious Nancy and her friends race against time to find out who has control of the train, why and to what end.

This is a fun, easy to read series. It is mostly in keeping with the original series but I have to say there are a couple of things about it that bother me as I was such a fan of the original books. In this version Nancy is a little scatterbrained about certain things such as filling her car up, and they have given her a pretty, wealthy, bimbo nemesis, (and yes they use that word which seems silly because all Dierdre is after is Nancy’s boyfriend, she really isn’t a challenge to Nancy in anyway). That aside they are entertaining reads, fun little mysteries.

The Girl Who Wasn’t There 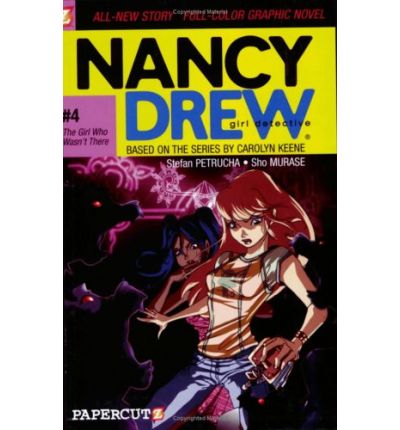 Nancy needs technical support to help fix her stuff, she finds herself talking to a girl in India. Soon the two become phone friends. One night Nancy receives a mysterious call that makes her think her friend is in big trouble. Nancy and her friends jump on a plane to India. When they try to find her it seems no one will admit to knowing Kalpana. Good thing for Kalpana that that sort of set back doesn’t stop a determined Nancy Drew. Even when it turns out her friend may have been kidnapped by the local crime lord.

This is a dark story being based around a missing person and a organised crime syndicate, however it still is tight and has fun moments often provided by Bess and George. Nancy is as determined as ever and seems to have a blind spot when it comes to her own safety. None the less it is an entertaining story.

It is Nostalgia Week in River Heights and so many people are in the historical mood. People are committed to trying to live as if it was the 1930’s. The fun though is interrupted when a dollhouse that is up for auction, starts depicting strange crimes before they actually happen. Nancy is convinced something other than ghosts is responsible but at many turns she finds herself thwarted. Soon she sees a crime scene that shows her as the victim, the perpetrator didn’t count on Nancy’s friends though and Nancy soon gets to the bottom of the case.

The Demon of River Heights

Nancy and her friends Bess and George are helping out on a student film about a demon monster. When the film makers go missing the girls set out to find them the problem is the monster might find them first. There is also the question of what Canton Angley is doing in River Heights. It is all very mysterious which is just how Nancy likes it.

The story is mysterious, has more than one thread and moves at a pretty good pace. The illustrations are fairly simple with faces and details often being a bit blurry. Thing is though if you want a good short mystery read, and/or you have a child who isn’t all that into reading, these are a good thing to try. They won’t challenge and they will at least get some reading happening. 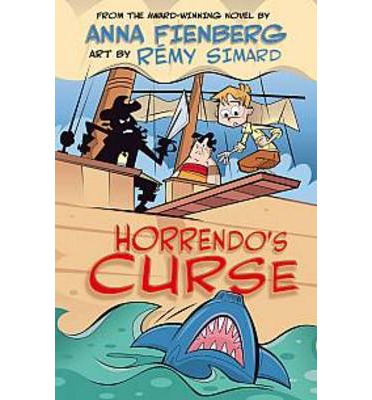 By: Anna Feinberg and Remy Simard

Horrendo is a nice, polite boy, not at all the sort of boy who would be expected to do well when the pirates raid and capture all the 12 year old boys from his town. Horrendo can’t curse or hurt someone, in fact he can’t be mean in any way. None of this stops him being taken by the pirates. When on board Horrendo does what he does best, is polite and good at things such as cooking. Using his skills he does his best to survive. What happens though when the captain takes offence at Horrendo’s niceness and makes him walk the plank?

This is a fun and thoroughly enjoyable graphic novel. It’s bold illustrations perfectly fit the story of pirates and how to outsmart them. Horrendo is cursed but he makes the most of it, it is after all the only way he knows. If you have a reluctant reader who might be more inclined to read if there are plenty of pictures or someone who likes pirate stories with a twist then definitely give this a go. The underlying theme of politeness is not very subtle but in it’s blatancy it works and makes for a good story with a good heart.

The Secret of the Sphinx

The Pirate Cats are at it again. This time it appears they have gone back in time to Ancient Egypt, their goal is to change the face of the Great Sphinx to a cats face. They infiltrate a temple and trick their way into the Pharaoh’s court. Is it possible they will manage to achieve their plan. It is up to Geronimo and his friends to uncover their plot and unmask the pirate cats before this happens.

This time the Pirate Cats head to Rome and put into action a plan to change the name of the great Coliseum to Catardonius in order that the cat lineage becomes famous. Can Geronimo and his friends stop the cat’s plot and their influence on the Emperor so history isn’t changed. 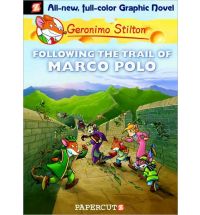 Khanbalik is the capital of Ancient China and 1292 is the year the Piracte Cats have travelled back to. This time around their scheme involves tracking down the famous explorer Marco Polo. They have plans to steal his journal and take credit for his discoveries. It is up to Geronimo and his associates to prevent this evil plan.

The Pirate Cats are aiming for Paris, France this time around but they overshoot and end up in the Ice Age. A little quick thinking and the cats decide that if they capture a mammoth and take it back to the future, they will finally make their fortune. As always they don’t think about how this will effect others and it is up to Geronimo and his friends to make sure their scheme doesn’t succeed.

Who Stole the Mona Lisa?

The year is 1517, it is the middle of the Renaissance. The Pirate Cats have come back to this time in France in order to steal Leonardo’s painting of the Mona Lisa. Also they hope to translate a secret code, thinking it will lead them to treasure. This time they have put in to action a plan that may prevent Geronimo and his friends from ever foiling their time travel plans again. 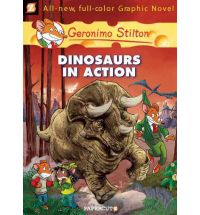 Last time the Pirate Cats tried to stop Geronimo from interfering with their plans, it didn’t work. It did, however provide them a useful piece of information and that is that Professor von Volt is the one who has made it possible for Geronimo and his friends to travel through time. So this time around the Pirate Cats go after the professor and send him 140 million years into the past, to a time when the earth was ruled by the dinosaurs. How are Geronimo and his friends going to save Professor von Volt and stop the Pirate Cats?

This is a fun series of graphic novels great for Geronimo fans and those who don’t like to read. They are set in a vast array of historical settings and as with the novels historical facts are dotted throughout the story. The adventure aspect is fun, the pace quick. An easy and enjoyable way to get some reluctant readers reading and perhaps a little learning will sink in.