Pug is an orphan apprenticed to a Magician at Crydee, a frontier outpost. He never wanted to be a magician but he has a gift. When the peace of the Kingdom of the Isles is threatened by alien invaders Pug and his best friend Thomas are swept up into a conflict that will change the course of the entire kingdom. Pug’s destiny is to master the magic of two lands. Thomas is to inherit a powerful legacy that could destroy more than just himself if he can’t master it.

This is epic fantasy. It sweeps across worlds. There are heroes, dwarves, elves, magicians and mad kings. Pug’s arc is harsh as his journey takes him across two worlds, two very different cultures. He learns and he adapts. He was an orphan adopted into power, who grows beyond anything he could really have imagined. Thomas’s journey is that of finding his humanity. In Feist’s hands a simple war story sweeps across two incredibly designed worlds. He brings to life many characters that will stay with you. This is the first of many books set in the Kingdom and many characters who’s lives will draw you in. 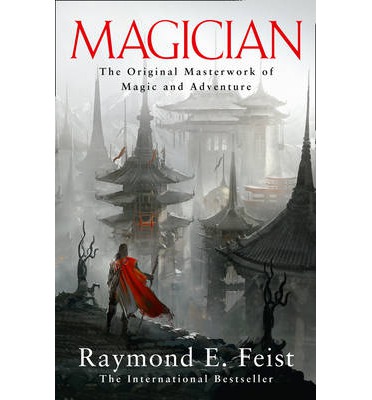 So you may wonder at such a short review of such a long (600 – 800+ pages depending on which edition you have). So here it is. I love this book. I love this series. I am a huge Feist fan, have been since Magician was first put into my hands when I was 12. This was the first book I tried to read by torchlight under my bed covers. When my teacher gave it to me in class I was so embarrassed. He put it on my desk, this great big volume and said he though I might like it. Like I didn’t have enough problems being the smart bookish one in a country high school where students were far more interested in your sporting prowess.

I couldn’t bring myself to read it at first. When he asked how I was going I lied and said it was good. So I thought I’d better at least try to read it. The rest, as the cliche goes, is history. I totally loved it. I kept going out and buying Feist books. In fact I have gone through several copies of the very first book and really need to replace Silverthorn and Darkness at Sethanon. In reality his was probably the first epic fantasy I ever read, and I never looked back. This is one of the books that created a love of the genre in me. Sure it isn’t really a YA book but so what. I read it when I was 12, it is totally accessible and not one of those books who has themes or stylistics that would suggest it is better suited to older readers.

I highly recommend this book. 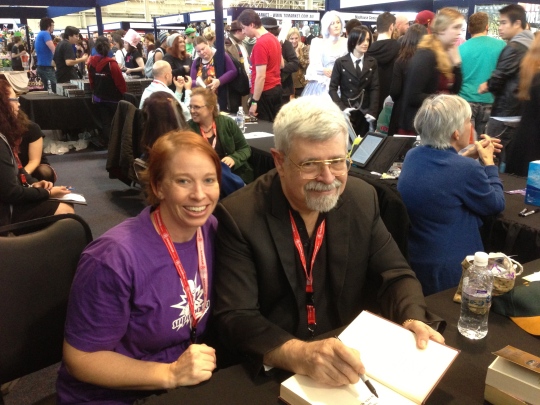 Also on the weekend I got to meet the man himself so I figure now is as good a time as any to throw this book into my Recommends and Old Favourites.

I won’t post a link because there are so many editions of this now.

The Emerald Atlas is reviewed here.

This is the first book in The Books of Beginning series by  John Stephens. This story is a sweeping fantasy that takes you through time and into hidden places. Evil enemies, strange allies, a prophecy and three children just trying to keep their family together.

They have also created very brief trailers on some of the characters if you’re interested:

In the middle of the night on Christmas Eve, Kate, Michael and Emma are taken from their beds and left at an orphanage. Ten years and a string of increasingly miserable orphanages later, the children have learnt to rely on themselves and each other. The memories of their parents have faded though they try desperately to cling to them. Kate has taken it upon herself to keep everyone together and as safe as possible. Michael has retreated into a world of photos, exploration and imagination – largely to do with dwarves. And Emma has grown a thick and stubborn skin unable to unwilling to let anyone get passed it.

They arrive at Cambridge Falls, sure this will be the worst place yet, and quickly realise something strange is going on. While exploring the old house they discover an old leather bound book and in opening it set into motion an ancient magical prophesy. They journey together across time, meet beings they never dreamed existed and find they have to save an entire town. Are they brave enough to confront their fears and fulfill their destinies? Are they strong enough to give of themselves to more than each other?

This is a detailed and sweeping tale of three children just trying to survive and stay together. I was drawn in and drawn along as the story of not only the children but the people of Cambridge Falls unfolded. The characters are well developed and each goes through their own ups and downs and you are happy to stay with them as they do. The supporting characters make the central story possible, giving it depth and heart. This is the start of a journey that is full of action and laced with humour – some of which seems to me very tongue in cheek, but that makes it no less enjoyable. A fantasy world I will willingly return to.