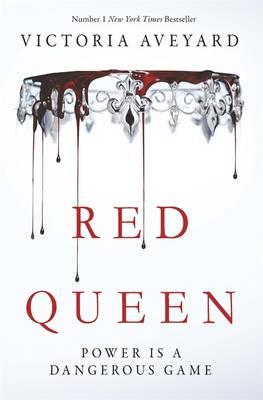 There are always divisions in the world. Here these divisions are simple, you are a silver blood or a red blood. Silvers are the ruling class, silvers are gifted with powers, super powers. There ability to manipulate elements, thoughts and do others things sets them apart.
Mare is a red. She comes from the poverty stricken Stilts and has watched her brothers go off to fight in a war that means little but the silvers say they need. Mare doesn’t think anything will change, until the day it does. Mare may bleed red but she possesses an incredible ability of her own. This thrusts her into a confusing game of politics that she simply isn’t equipped to play. How will she find her way through it and stay true to herself.

It seems that this is one of a few books to have come out with a similar theme, though really class wars, no matter how the classes are divided, is not a new theme. It is tried and true for the reason that at it’s heart it is accessible to all of us. Mare is a strong and interesting character who clearly isn’t equipped to deal with the situation she is thrust into. It is good to see she has faults and that her inexperience isn’t instantly overcome as she fumbles through. The world is at times harsh and beautiful. The battle on going and layered and the enemy isn’t always the person you think it is. An enjoyable read. Try it if you liked Hunger Games.

Stuff Happens : 3 Books for You