I received my copy from the publisher. 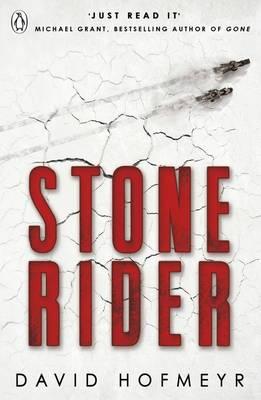 Adam Stone wants nothing more than to escape Blackwater, the hole of a town that he lives in. He longs for something more, something better, and if Sadie Blood is part of that then all the better. The thing is there are only two ways out of Blackwater, death or riding in the brutal Blackwater Trail. The race is harsh, desert environs, savages and the other competitors. The competition is so fierce because the prize is a one way ticket to Sky-Base, a place of freedom, health and luxury.
Adam wants to ride but he has to overcome his fears to get to the starting line. Then he has to overcome everything else. He believes he has to ride the race alone, but things soon change and he ends up alongside Sadie and outsider Kane. Will Adam overcome his fears and find his courage and will any of them make it to the end?
This is a dystopian book with a very immediate goal. Setting the events around the race give it tension because time is limited. The world Hofmeyr has created is a bleak one. Parched desert, a people downtrodden and filled with anything but hope. This world, though some sort of post apocalyptic is also filled with futuristic touches – the bikes that meld with the rider, tech implants, robots, non terrestrial transport and living.
Adam is very definitely an underdog. He is bullied, withdrawn and has a condition that only makes his life harder. Sadie is a strong willed girl who is determined to separate herself from her own legacy, and Adam’s attraction to her is strong but doesn’t overwhelm the plot, in some places it very much drives it. Kane gives the story a darker twist, who is he and where does he fit.
A fast paced and entertaining read. I really enjoyed it and recommend it for those who like dystopian or action stories.
Publisher: Penguin
Published: 24th June 2015
Format: Paperback 305 pages
Genre: Action, Dystopian
ISBN: 9780141354439