I was sent this book by the publisher 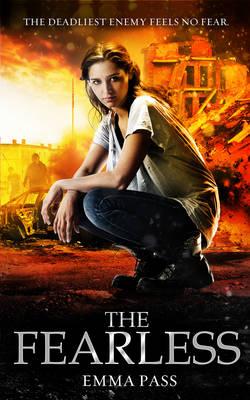 The Fearless are coming, and then suddenly they are here. Cassie’s life is torn apart that night. The Fearless are brutal, they destroy whatever and whomever gets in their way. Somehow Cassie and her brother get away. They get to be part of the small group who make it to the island. Her brother is the last person she has left in the world and she will do anything to look after him. When the island is invaded and he is taken, there is nothing Cassie won’t do to find him and bring him home. This includes making a deal with Myo, a strange boy who turned up on the island the same time as the Fearless. He came from the mainland and seems to think he knows where her brother is going to be taken. Myo though has secrets of his own. Secrets that will destroy their very fragile truce if Cassie was to discover them.

This is a zombie story with a twist. These zombies are man made and they are not totally brainless, some of them, they are however very driven. There is a lot of dark texture to this story. Cassie is tough and focussed but not as competent as she originally thinks. She also doesn’t know as much about what is really going on as she should. This narrow focus and interest is part of what will cause her big problems. Myo is just as driven as Cassie but his reasons are part of his big secret. This secret adds an interesting layer to the story. Cassie has to go through a big learning curve as she begins to understand that things aren’t as simple as she has been led to believe, the world she thought was black and white really has many shades of grey.