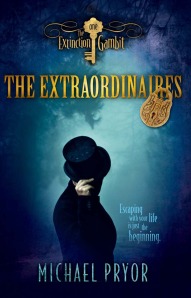 Book one of The Extraordinaires series

Kingsley Ward had left home to pursue a career as a stage magician. It doesn’t start well. In fact it couldn’t have started much worse. Instead of amazing the audience with his sleight of hand and death-defying escapology, his first real performance ends in disaster. He loses control of his hidden wolfish nature. In steps Evadne Stephens, juggler, inventor and weaponsmith, who has decided to take an interest in Kingsley. As his hopes and dreams look likely to collapse, Kingsley’s father is abducted and his home ransacked.

Kingsley finds himself swept into a world that had previously been hidden from him, called the Demimonde. Some of the residents of the Demimonde have more than a passing interest in Kingsley though, and he finds himself targeted by two warring factions: the immortal magicians with nefarious plans for mayhem and little interest in Kingsley’s survival; and the last of the Neanderthals who are working on a plan to wipe out the human race once and for all.

Kingsley is not alone as Evadne proves far more resourceful and talented than he could ever have guessed. Also the famous author, Rudyard Kipling, is keen to help, though Kingsley isn’t sure why.

Michael Pryor has a way with first sentences, they just draw me in – Kingsley Ward’s wolfishness was a problem. If it weren’t the howling, it was the occasional desire to bite boorish people, which was rarely acceptable, no matter how boorish the boor.

This world that has been put before us is more familiar than Albion from the Laws of Magic series and yet in some ways more bizarre. The Demimonde is extensive, dark and just as layered as the surface world.

Kingsley’s animal nature holds him apart from many around him. The addition of Kipling gives Kingsley’s character yet another dimension. Underneath it all Kingsley is a nice person who struggles with his own secrets and loves to challenge himself. His magic skills add to his mystery and are a useful tool when he finds himself in certain situations. His willingness to accept Evadne’s capabilities is a trait that Pryor gives several of his male characters and this is a wonderful treat as it allows the female characters to stand on their own and in some cases really shine.

Evadne is in someways very open, she knows herself well, and in other ways she is very guarded. She has depths and strengths that make her interesting. I love the way she is the one who creates the weapons. For me proactive females in a story are a huge plus and Pryor has once again delivered on that front.

As the story weaves together from various points of view, a more fully realised landscape is laid out for us. I love the way the sinister and bizarre are blended seemlessly in through the mundane. As with other of this authors novels, there is more than one story thread going on and as always Pryor handles them deftly in a manner that never comes across as confusing. If you love steampunk, old school performance magic and fascinating characters definitely give this a try. Highly recommended.

The Song of the Quarkbeast