The second book for December Book Club is 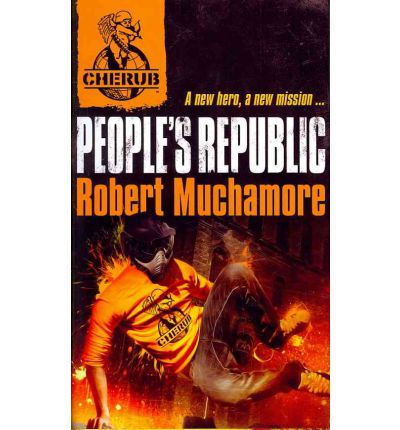 Ryan is twelve, just out of basic training and desperate for his first mission. he finally gets the chance and heads to California to befriend Ethan Aramov. Ethan’s mother is estranged from her family, his grandmother is the matriarch of a billion dollar criminal empire. The thing with CHERUB missions is you can’t always plan for every contingency. It becomes more than they originally planned and Ryan is confronted with more than he bargained for.

Fu Ning hates school, rules and getting up in the morning. Still she finds it odd that her adoptive mother turns up at school and drags her out of it. They end up on the run and when she finds out exactly what her father was her life will never be the same again. On the run, working illegally and just trying to survive.

Fans of the CHERUB series may have wondered how the series would survive without James and all the old familiar characters, well I’d have to say it does it very well. These stories have always held elements of dark due simply to the nature of the organisation, children who infiltrate criminal circles of various levels. This is perhaps one of the darkest as it delves into the realm of people smuggling and the illegal sex trade, the latter is not mentioned in explicit detail.

Ryan is a solid replacement for James; tough, trained, and untried, he makes mistakes but has a core of compassion. It will be interesting to see his character develop through this three story arc. Fu Ning is tough and full of attitude, she needs to be to survive what she comes against and if some of those senarios don’t cause you to pause and think for a moment then I will be surprised.

This story is tough, even brutal and definitely not for younger readers. Muchamore has delivered a story with gritty realism and terrible truth at it’s core. As always the CHERUB books are full of action and move along at a fair pace. I am a fan of the series and that remains true. This was a solid addition to a series that appeals to even non-readers but I feel I have to add a word of caution – these topics are very real, and may be considered confronting.

Honestly I think I prefer Ryan to James for reasons I’m not really sure I can put my finger on, probably to do more with the way James treats the girls around him, even though most of them can kick his ass.
Why Choose This?
Well without question these books are huge sellers internationally. I think they are great and as a book seller they are something I recommend all the time. There are people out there who would say these don’t belong on the reality side of the book club equation. I have had people tell me they consider them to be genre fiction. However for me, the fact that they are set solidly in the now puts them into general fiction as opposed to genre fiction. For me the thing that really interests me is how putting these topics into a YA book brings them to the attention of young adults. That is something I will look at later on.
So do you agree that this series and this book is popular fiction or do you think it fits more appropriately into the category of genre fiction?