I received this copy from Penguin Books as an ARC 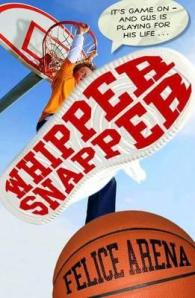 Gus Delfino is 14 and a basketball player for the Pennsbury High Panthers who have just made it to the U15’s district playoffs for only the second time in the schools history. He is pretty sure they are going to go all the way. Gus is like a lot of guys though, the girl of his dreams doesn’t talk to him and he is bullied by bigger guys. All of which pales into insignificance when Gus is involved in a terrible accident. It’s amazing he survived but then he’s not so sure he’d call it survival when he wakes up in the body of an old man. Now he has a 70 year old wife, a 50th wedding anniversary and really bad taste in clothes. No-one believes it is him and it looks as though he isn’t going to be able to help his team get to and win the final game.

Gus seems like a fairly typical high school boy focussed only on himself and his wants. He has friends and problems and things seem very different when he is forced to look outside his own little world. This story moves along at a fairly brisk pace and has quite a few funny moments in between the more serious ones. It’s light tone, modern style and easy readability should ensure a readership that will enjoy it. With it’s sports focus it’s bound to appeal to Specky Magee fans. It’s style puts this more in the 10+ preteen reading category than older YA and there is nothing in the content that would be considered unsuitable for that younger age range.

Purchase: (This book isn’t available until August 1)use the Booktopia logo on side of the page

The Big Elephant in the Room