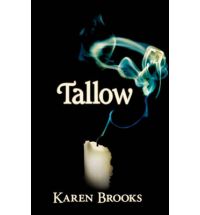 La Serenissima is a canal-laced city that borders the mystical place called the Limen, home to the Bond Riders. It is on this border that Pillar, a humble candle-maker rescues a child whom he decides to raise as his apprentice. It is years before the child’s strange talents manifest and when they do even the art of candle-making is transformed from something ordinary and everyday into something far more dangerous. This apprentice is more than just a rescued orphan and as the ancient magic in Tallow begins to awaken, others begin to take notice. When this happens Tallow’s simple and ofttimes cruel life will never be the same again.

There are people interested in Tallow who stick to the shadows, including a vengeful aristocrat, an exotic queen whose plotting goes deep and the lethal creatures known as the Morte Whisperers. Then there are the Bond Riders, responsible for Tallow ending up in Pillar’s hands, but just what part do they play in all of this?

This is a fantasy on a grand scale, complete with many strands that as a reader I struggled at times to pull together, which was a little disappointing as I had really wanted to read this book. There isn’t any one thing I could point to and say it was the reason for my reaction. It is very descriptive in a way that makes it easy to visualise Tallow’s spartan and harsh existence, as well as breathing life to the canal-laced city in which Tallow resides. I quite enjoyed the Italian base (language and structure) of this society. It may be a simple case of too many players being involved.

If you like your stories grand in scope and complex then this will be worth a look. I am hoping things will become a little clearer in the sequel. Sometimes writing styles really work for an individual reader or they don’t, for me this didn’t.

Purchase: here or use the logo to link to Booktopia