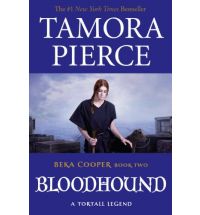 Beka Cooper is now a fully fledged member of the Provost’s Guard. She is a Lower City Dog dedicated to keeping the peace in Corus. Things aren’t going smoothly for Beka, she can’t keep a partner and while in between them she is re-teamed with Goodwin and Tunstall, it’s not the way it’s meant to be. Then counterfeit coins start turning up all over the city, merchants start raising their prices, there is talk of grain rot and people start to riot. Then someone with a vendetta comes after Beka.

If crisis is to be averted Beka has to go into unknown territory. She and Goodwin go undercover to Port Caynn, plunging into the gambling halls and the Rogue Queen’s court. Corruption runs deep though and Beka struggles to play her part, but she is determined that nothing and no-one, not even the flirtatious Dale, will jeapordise her mission.

This is a strong sequel to Terrier. Corus is a familiar place, whose streets are, if possible, even more tension filled than before. Port Caynn is painted with a confident hand that helps it jump off the page. Beka is a wonderful character who relies on her brains rather than her gender to succeed in life. Her attractiveness is in her competence and loyalty not her curves or fashions. Her friends are delightfully developed, it is a joy to read their stories and interactions. Colour comes not just from location description but character as well. An engrossing read that I had to revisit and will again before Mastiff comes out in November.