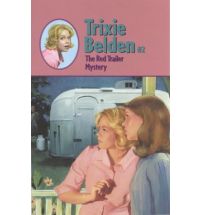 Jim Frayne has just inherited half a million dollars but he doesn’t know about the money because he has run away again, hoping to avoid his step-father. Trixie and Honey are off on his trail. They want to find him to tell him the good news and offer him a proper family.

No matter that she already has one mystery to solve, Trixie has a way with just attracting more. She knows something isn’t right when they meet up with another family traveling in a luxury trailer like them, she just doesn’t know what. Then the daughter Jo goes missing and they find out the trailer The Robin, has been stolen. Trixie is determined to figure out what is really going on. Now Trixie and Honey are looking for two missing people, but it may not be as difficult as it seems.

These books are, of course, a little dated but values and descriptions like that aside the stories hold up alright. The characters complement each other and balance the story out. Trixie and Honey are both passionate and fun, with Honey being the gentler personality toning Trixie’s wilder impulses. Jim brings a maturity to the group. With so many things to figure out the Trixie Belden books were, and I think still are, fun adventure stories.