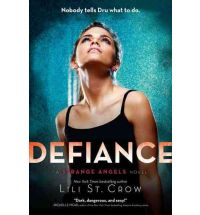 Dru is back and really pissed. Graves is still missing and Dru is done with playing nice, listening and doing what she is told. She is sick of the lies, of being sheltered and of the fact no-one seems to know where Graves is or even really looking for him. Finally she is let out on a hunt as bait but when it goes wrong the Order decide it’s not wise to allow that again, she is too valuable to them.

Thankfully the wulfen are around, and she has brief moments of freedom when they allow her to run with them.

She hopes Graves won’t be too damaged by the time they find him, and holds on to the hope that the broken Ash can be restored. Even with Anna gone Dru can still be reached by her enemies in the Schola Prima and it is all starting to take a toll. When certain information comes her way she finds she has reached her limit. She heads out on her own terms, if the Order want her they will have to keep up. Is Dru strong enough to face Sergij, save Graves and survive? And will she ever bloom?

The lastest in the Strange Angels series and (spoiler alert) sadly Graves isn’t in most of it. However it must be said that other characters step up to the plate and nicely fill the gap. Dru’s relationships with the other wulfen are a nice counter to her strained relationships with the djamphir. Even though there is no Anna at the Schola there is still plenty of plotting and intrigue. The layers are well developed and the traitor is not instantly recognisable (or at least wasn’t to me). In some ways where the story has been left feels like a beginning and in some ways close to an end. All of which left me wondering where she is going to take it next. The only thing that bugged was the mention of a random character that sounded too familiar too me and jolted me right out of the story (a Cajun named Remy who throws cards).