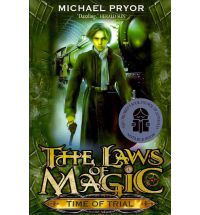 Aubrey Fitzwilliam is taking part in the nobel pursuit of cricket, but it seems even something so ordinary cannot stay that way with Aubrey around. The magical attack when it comes is quite impressive. Then into Aubrey’s possession comes the mysterious Beccaria cage and it could be the solution Aubrey has been looking for – a way to reunite his soul and body once and for all. But then it could also be something else, hiding a secret agenda. Then something happens to Aubrey and he only narrowly manages to escape a terrible fate thanks to his friends George and Caroline. Then more decidedly unusual things start to happen and Aubrey decides he has only one real course of action – confront his nemesis Dr Tremaine.

With the ever trustworthy George and the dauntless Caroline at his side, Aubrey travels to Holmland’s capital Fisherberg. He is deep in the heart of hostile territory here yet with all things Aubrey gets entangled in it doesn’t stay focussed in one direction. Before he even arrives he is thrown off a train and finds himself mixed up in a plot involving brigands and black market weapons. As well as the usual magical conundrums and near death experiences there are ghosts to deal with. Can Aubrey deal with everything and do enough to prevent Dr Tremaine’s plotting before the world is plunged into war?

Another exciting and entertaining installment in the Laws of Magic Series. It is so easy to get swept away into the intrigues of this world and the smalled but none-the-less important issue of Aubrey’s great dilemma. There is sophisticated magic, quick thinking and characters that just work so incredibly well together all in a world bought to life through Pryor’s wonderfully steam punk descriptions. These were the first speampunk novels I read and I very quickly became addicted.

Trixie Belden and the Secret of the Mansion