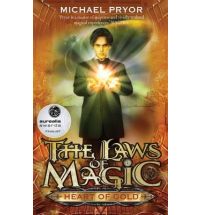 It starts with a night-time rescue mission which ends with Aubrey and George deciding it’s time they took a holiday. Aubrey should know nothing in his life is that simple though and truthfully that is how he likes it. Still it all looks a bit much when, before he has even set off, his tasks to complete along the way include: solving a royal mystery, finding a missing ornithologist, acquiring some old correspondence between his grandparents, and his father throws a spot of diplomatic espionage for good measure.

When he gets there though he finds yet another task grabs at his insatiable curiosity – some one is stealing people’s souls and leaving them as mindless monsters. Added to all of this the Heart of Gold has been stolen, considered the country’s magic lifeline it’s disappearance leaves the city in chaos. With everything going on will Aubrey manage to find time to be with Caroline or find a cure for his condition.

Another wonderful steampunk novel from the talented mind of Michael Pryor. You might think with all those different plot strands that things could get confusing. They don’t. Pryor deals with all the elements of the story with deftness, seamlessly weaving the strands together to create a wonderful and detailed story that is crammed with action and magic. His characters are strong, flawed and wonderfully real, perfectly complementing each other. I am a big fan of this series.

Spot Goes To The Park