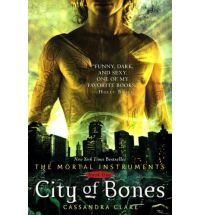 Clary Fray is a normal kind of teenager, issues with friends and parents. Then one night she notices a boy and because she follows him she witnesses a murder committed by a group of teenagers. The problem is no-one else saw it and there is no evidence it ever happened. Clary discovers the teens are Shadowhunters, born warriors whose lives are dedicated to fighting demons.

Step by step Clary is drawn into their world and slowly she discovers her mother has been keeping secrets from her. Secrets bigger than she could have believed possible. As Clary learns the truth she is pulled into a battle that could alter the fate of the world.

A love story with more than a twist. We discover with Clary the rich and diverse world of the Downworlders and Shadowhunters. I like the pull of the two world on Clary. Clare has given us a richly detailed world with just enough difference that it doesn’t feel like yet another paranormal teenage romance. I really like the variety of characters she has placed around the central two, providing you a wonderful clash of personalities that continues to pull you in.

These books may be more suited to older readers due to some of the sub-plots.