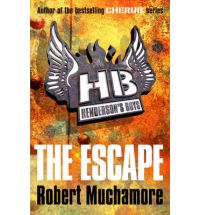 It is the summer of 1940. Europe is in the grip of WW2. Hitler’s army is advancing to Paris. Amidst all the confusion two British kids (Paul and Rosie) find themselves alone and on the run, hunted by German agents. British spy, Charles Henderson, tries to reach them first but can only do so with the help of Marc (a 12 year old, French orphan runaway).

Working with these youngsters to get them and sensitive information out of occupied France, puts Henderson onto the idea of using kids undercover…the war effort won’t be quite the same.

Cracking action set against the gritty background of WW2. This is the first in the Henderson’s Boys series, which tells the origins of the underage and undercover, Cherub organisation. An engaging read that may not be suitable to younger readers due to to nature of some of the violent content. Like the Cherub books I think these are great for reluctant readers.

There’s A Hippopotamus On Our Roof Eating Cake